Light of the Future

Aurora Lichtwerke has a tumultuous past behind it; during this past year as well, the lighting manufacturer has been threatened with closure. Now the plant has a future again. Thanks to a small LED bulb that destroys viruses and bacteria.

Is that what all hopes are being pinned on? Very inconspicuous at first glance, quite unspectacular: an LED bulb is the general consensus, normal in size, normal in brightness, nothing more. You have to switch them on, says Hubert Roßkopf in a mild tone, also explaining the difference between bulbs and lights – that’s important here, so pay attention! A light is the entire construction around a light source; it usually consists of a holder, socket, reflector and cover. The term bulb, on the other hand, describes the light source, the illuminant within a light. And that’s what matters here. The light can do phenomenal things.
Such as?
Destroying viruses and bacteria. Eichstätt in Upper Bavaria. Hubert Roßkopf took his time talking about his company on the phone: Aurora Lichtwerke, an SME with around 330 employees and a tumultuous, eventful past. Back in 1990, when Hubert Roßkopf was not yet the chairman of the works council, but just a young mechanic in the production department, the company was called Osram and belonged to the Siemens Group. In the factory, they mainly built halogen bulbs, car bulbs and special purpose bulbs for projections and the photographic sector. Hubert Roßkopf passed his master craftsman examination in 1994. He then took on a shift supervisor position. LED bulbs and lights hadn’t been invented yet. It was a quiet time. Business was good.

That will change by the early 2000s at the latest. Bulb and light production is changing: previously, a light was little more than a sheet metal box with a bulb in it. With the advent of LED technology, this has changed fundamentally. Roßkopf knows that the manufacture of LED bulbs and lights will require new skills and knowledge. The pressure in the industry has increased. New competitors have come into play.  In Eichstätt, the times are becoming more unsettled, with many years of ups and downs: In 2016, the Osram company was finally hived off and initially sold to a Chinese consortium. Most recently, the sole owner was the Chinese LED producer MLS. They intended to develop the location into one of the group’s leading European plants for new lighting technologies. However, in March 2020, they made the surprise announcement that the plant would close at the end of the year. We were all astounded, says Roßkopf. It was immediately clear to us that we had to fight for our site and for our future.

And that’s what they did. With great strength and solidarity. With the engagement of local politicians and the full support of IG Metall, the metalworkers’ union.  We pulled out all the stops, says Bernhard Stiedl, the first authorised representative of IG Metall Ingolstadt. We threw everything at it – from rallies and debates in the supervisory board meetings, making our own proposals for how to continue at the site, to background discussions with elected officials at all political decision-making levels and solidarity campaigns. Hubert Roßkopf emphasises that none of this would have been possible without our colleagues, without their sheer tireless commitment. By the middle of 2019, before the impending closure, the works council together with the employees had held workshops, developed concepts for the location and worked out new product ideas. We had an idea of how we could run our business in the future. The future that began last August. When a Munich investment company acquired the plant in Eichstätt and founded what is now Aurora Lichtwerke. 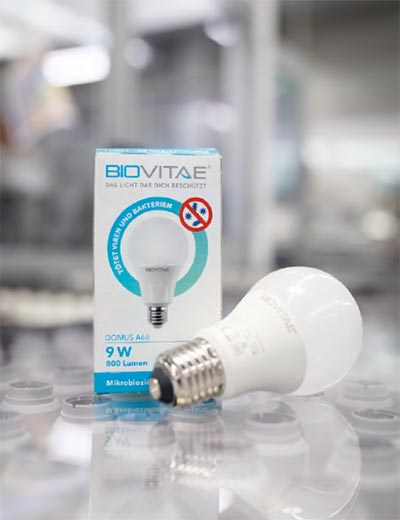 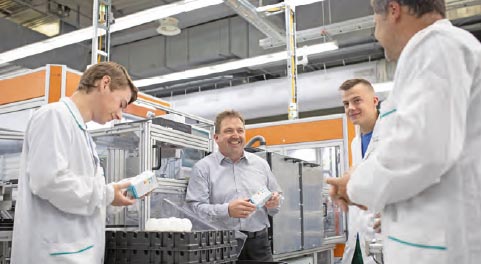 The new owner is taking on all employees and trainees and is committed to the collective bargaining agreement and to remaining in the employers’ association. Above all, however, the new owner is giving the Eichstätt-based company a future.  And it’s doing that with this small, inconspicuous light source that doesn’t look unusual at all, says Jana Rauch, the head of employee representation at the site. We produce various LED bulbs and lights with a patented combination of very special blue-violet light wavelengths, says Hubert Roßkopf. This mix of light wavelengths, some of which are in a range of 400 to 420 nanometres and therefore visible to the human eye, have a beneficial property: they are, as Roßkopf explains, harmful to viruses and micro-organisms such as bacteria, fungi and spores. The light frequencies affect the molecular structure of viruses and the metabolism of bacteria and spores and irreversibly destroy the shell.

Light with integrated virus prevention. That sounds simply great, especially in times of the pandemic. But also a bit like science fiction. That is isn’t, says Rosskopf. The effectiveness of light in relation to viruses has been scientifically proven. Various studies, in which the Bundeswehr Institute of Microbiology and others have participated, have drawn a clear conclusion. According to the studies, the number of SARS-CoV-2 viruses is reduced by more than 99 percent after one hour. Another study by the Finnish VTT Institute at the infirmary of an international airport showed that the hygiene of the entire area was significantly improved.

Studies are one thing. In Eichstätt, they are now hoping that their new technology will meet with widespread interest. Our product offers a huge opportunity, due also to the fact that, unlike UV radiation, it is completely safe for humans and animals, says Works Council Chairman Roßkopf.

There are many possible uses: classrooms, public authorities, offices, elevators. Wherever people come together, wherever there are viruses and bacteria, there is a risk of infection – these are all places where the LED blight sources from Eichstätt can be useful.  We can make an important contribution to fighting and avoiding pandemics in the future, says Hubert Roßkopf.  We very much hope that we will be successful and that we will be able to expand our plant step by step.